Born in Vietnam during the war, Fr. Ngo, 49, is the youngest of 11 children. When the war ended, he came to the United States at the age of 10 with his sister and her family. He grew up in Pasadena, Calif., and eventually most of the rest of his family came over as boat people.

After high school, Fr. Ngo studied engineering at California State Polytechnic University, Pomona. It was during his senior year in college that he attended a life-changing Ignatian weekend retreat.

After his college graduation, he worked as a civil engineer for a year and a half. In 1989, he entered the California Province of the Society of Jesus and was missioned to Gonzaga University in Spokane, Washington for two years of philosophy studies.

Next, he worked at St. Ignatius College Preparatory in San Francisco for three years, teaching religion and working in campus ministry.

He was ordained in 2000 and Fr. Ngo was missioned to the Loyola Institute of Spirituality in Orange, California for six years where he engaged in spiritual ministries and founded the Ignatian Spiritual Formation Program, training others in the Spiritual Exercises.

Fr. Ngo then served as the Formation Director for the California Province for six years. Since Fall of 2013, he serves at the Jesuit Retreat Center of Los Altos - El Retiro San Iñigo in California.

One universal truth, for Fr. Ngo, is reminding people over and over again how much they are loved. “People come with so much baggage and part of the spiritual growth and insight is to leave our baggage behind,” he says. “Surrender and let go of our agenda and let God lead us.” 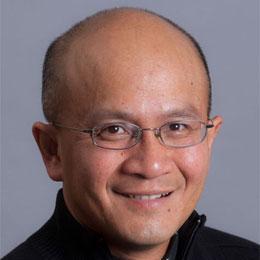